The custom of theater-going in Brazil began in 1808 with the arrival of the Royal Family. The king invited foreign theatrical companies to present their plays on stage in his new home. From the 19th century on, the comedy of manners appeared, with emphasis on texts written by Martins Pena. Soon thereafter, Teatro de Revista, most similar to that of Vaudeville, would appear. Like the American vaudeville – the word derives from the French term, vaudevire — this theatre form featured variety shows using music, comedy, dance and even magic.
But it was with the debut of “Vestido de Noiva”, by Nelson Rodrigues, in 1943, that critics identify as the birth of modern Brazilian theater. Directed by the Polish actor Ziembinski, the play broke with all previous norms.

Written in just one week in 1941 and staged two years later, Ziembinski’s audacious staging of “The Wedding Dress” with its open treatment of sexuality, would forever change the life of NELSON RODRIGUES, and that of Brazilian theater where, for the first time in its history, a dramatic text replaced the trivial scenes portrayed in the popular comedies of manners with the space determined by reality with its memory and hallucination. The innovations of VESTIDO DE BRIVA soon made the leap from the restricted field of Theater to other Arts. It was written that dramaturgy entered, for the first time, the domain of literature. It would be more appropriate to say that THEATER, as spectacle, became universal in the manner of other modern art forms, and NELSON RODRIGUES represented for the Stage the innovations that Villa-Lobos brought to music, Portinari to painting and Carlos Drummond de Andrade to poetry. Rodriguiana dramaturgy reflected a broad panel of Brazilian urban society. Through clear, succinct, vibrant language and the ability to expose his characters’ less confessable desires, NELSON RODRIGUES paved the way for All Authors that have emerged in recent decades. 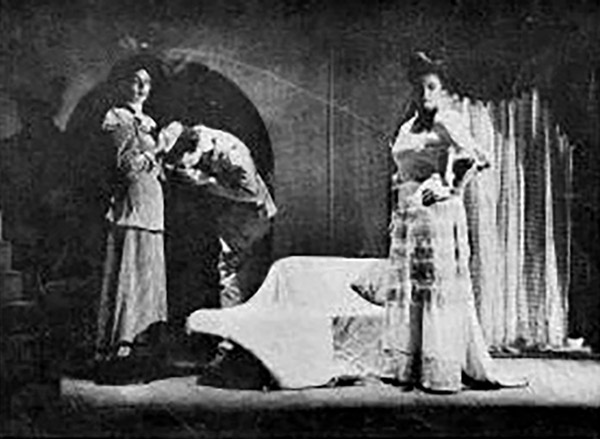 NELSON FALCÃO RODRIGUES was born on August 23, 1912, in Recife, Pernambuco, son of Mario Leite Rodrigues (a journalist who played a strong role in the renovation of the Brazilian Press) and Maria Esther Falcão Rodrigues. At the age of 13, Nelson made his debut in journalism, writing for his father’s daily newspaper, “A Manhã”. His first experience was police reporting. At the age of 14, he wrote the article “A Tragédia de Pedra” (Pedra’s Tragedy) in a column which featured texts written by Monteiro Lobato, Antonio Torres, Agripino Grieco, Humberto Campos, José do Patrocínio Filho, Medeiros de Albuquerque and other great literary men of the times. In 1929, Nelson turned to soccer, writing together with his brother Mario Filho. But the death of his brother, Roberto Rodrigues, a painter and illustrator murdered at the age of 23 would leave an indelible mark on his work, especially his dramas. In 1940, Nelson made his theatrical debut with the drama “A Mulher Sem Pecado” (A Woman Without Sin), staged by the Brazilian Comedy of the National Theater service. On the night of December 28, 1943, at the Municipal Theater of Rio de Janeiro, his ” Carioca Tragedy The Wedding Dress – A Carioca Tragedy” was staged by the amateur theater group, “Os Comediantes”, with sets by SANTA ROSA and directed by Zbigniew Marian ZIEMBINSKI